The #Summerfall Event is now over with all rewards unlocked. If you purchased The Elder Scrolls Online: Summerset and logged into the game by October 7, you will receive your free rewards by October 10. Thank you for participating and congratulations! 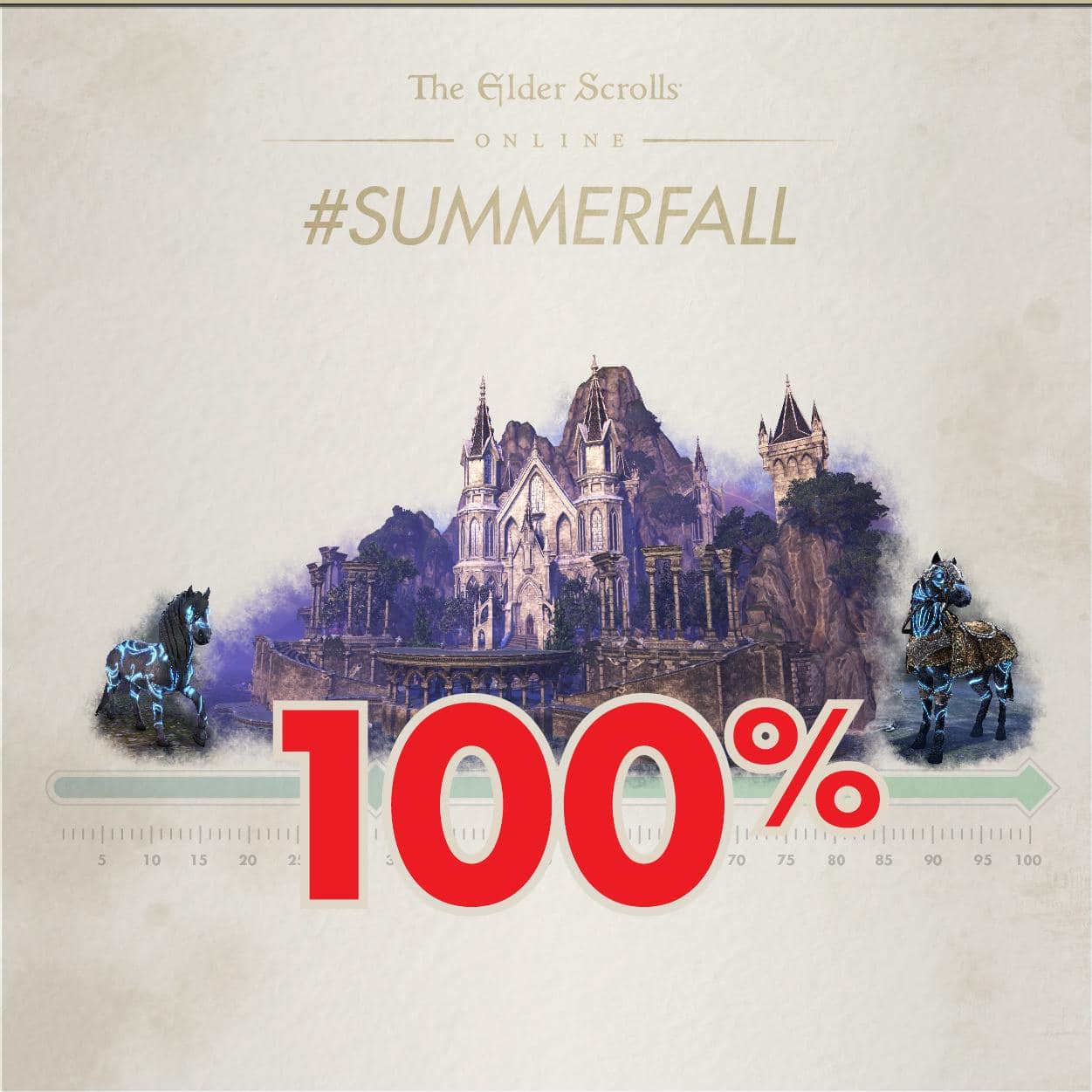 Venture across the isles of Summerset and Artaeum and visit 10 unique locations to earn up to three special rewards for all ESO: Summerset owners.

This perky but enigmatic equine glows with Magicka through the mystic runes that embellish its possibly-illusory epidermis. Enchanting!

Though the Psijics are not a combat order, the monks do concede a need for protection when venturing beyond Artaeum, and when their fighting escorts need to be mounted, they conjure up these impressive warhorses for them.

When Artaeum was removed from Tamriel, a few neighbouring isles went with it, including the site of the Grand Psijic Villa, a monumental estate with magnificent views of the south coast of the main island.
Complete the Pathfinder Achievement

Venture across the beautiful isles of Summerset and Artaeum to unlock the Summerset Pathfinder Achievement. Unsure where to find your next location? Check out our helpful map.

When is the Summerfall Event?

How do I help unlock the rewards?

What are the rules for eligibility?

If you own The Elder Scrolls Online: Summerset and log into the game before October 7, you are eligible to receive each reward (if its requirements are met). Even if you only buy the new Chapter towards the end of the event and are unable to earn the Summerset Pathfinder Achievement in time, you will receive the rewards. The deadline for acquiring the Summerset Chapter and logging in is October 8 at 1:00AM BST.

Can I still help earn the rewards if I already have the Summerset Pathfinder Achievement?

Yes! If your account already has the Summerset Pathfinder Achievement, it’ll be automatically added to the count at the start of the event. If you want to do more, why not give your fellow players some tours and help them get the Achievement themselves?

We checked to see how many ESO: Summerset owners had already obtained the Achievement and added them to the tally. When the event officially begins on September 20, we'll begin updating the meter's progress daily.

What does the 100% on the meter actually mean?

The 100% completion goal on the Summerfall Event progress meter is a goal-post we set when designing this event that we believe our players have high likelihood of reaching. We want our players to have fun with this event and successfully earn all three event rewards, and we chose a goal with that in mind.

While we aren’t disclosing numbers, we can confirm that “100%” does not mean 100% of all players who own ESO or even ESO: Summerset.

In order to travel to Artaeum, you must complete the first Summerset main quest titled "The Queen's Decree". You can acquire this quest from Razum-dar just outside the town of Shimmerene.

When will we receive our rewards?

All owners of The Elder Scrolls Online: Summerset who have logged into the game by October 8 shall receive their free rewards by Wednesday, October 10.

Where can I buy The Elder Scrolls Online: Summerset?

You can buy ESO: Summerset, including Standard, Upgrades, and Collector’s Editions on sale here.

The sale dates are as follows:

The Elder Scrolls Online Standard Edition (Does not include Summerset Chapter)

Note that the sale ends Tuesday, October 2. Any purchases of ESO: Summerset made between the event's start and October 8 at 1:00AM BST will receive the Summerfall rewards.

Buy Now
This page is under translation.